So, I’ve been feeling pretty mopey lately (not writing for fear I’d end up whining), especially yesterday and this morning. Then, I was super angry, because the large scary Russian woman who comes to the CareerLink treats me like a speck. A speck! I mean, it’s not really my fault that neither she nor her husband speak English (and I am SO empathetic to ESL learners . . . so it’s not like I was mean to her or her husband), and it’s not my fault that he can’t get a job because he can’t speak English, and it’s not my fault that she is pregnant and tall and angry and mean. Anyway, I wasn’t feeling totally benevolent towards humans in general.

This stress, paired with a coworker who left today in a face mask because she might have pneumonia and the Lysol-wiping bonanza that ensued (apparently I’m the only one in the office with the foresight (or paranoia) to keep Lysol wipes at my desk), paired with an ABSOLUTELY BEAUTIFUL late-summer/early-fall day, planted the thought of exercise in my head.

So I went for a brief but vigorous walk around the neighborhood. A few houses down there’s this great big red, white, and blue banner that reads “Welcome home, Richard!” I’m guessing Richard was part of the 56th Stryker Brigade Combat Team that just came home from Iraq. Sorry, no pictures of the sign, as my camera does not come on walks with me.

Now no one would guess it, but exercise plus the general human incompetence that I encounter each day at work somehow resulted in wanting to do something lovely and anonymous for Richard. I toyed with the idea of writing an anonymous thank you note (I have tons of thank you cards left over from wedding gifts), and putting it in the mailbox.

Every so often I have urges to do really super nice things for people, either anonymously or in ways they won’t discover for a while, like Amelie. I don’t usually follow through on these things. Usually they are just impractical or inconvenient. I’m not good at inconveniencing myself for others. I’d like to be.

Have you secretly done something really nice for someone you don’t know? Anything you’ve wanted to do secretly but have never gotten around to? 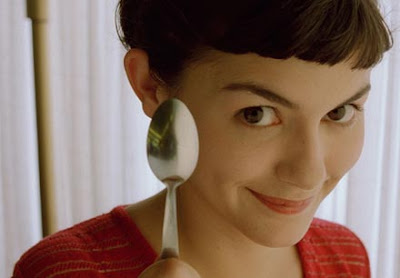