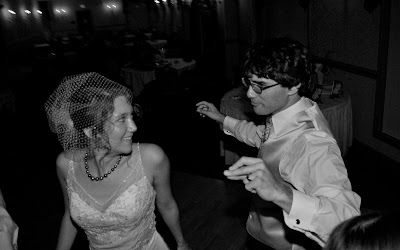 It also happened to be my sister’s moving day, so we drove in to Philly to check our her apartment. There was little time to think about where to eat, so, in desperation, we ate at Chili’s. It wasn’t bad.

Last year, it felt like there was all this build up to the exact anniversary date itself. This year, I feel a little bit like it snuck up on me.

Even though we didn’t do anything super-anniversary related on the real day, August is full of fun and celebratory events. We’re setting ourselves up to be a little indulgent all month. I’m excited.

I did more exciting things before I started this blog than I do now. Well, maybe not, but sometimes it seems that way.

Hence, flashbacks, to more exciting times of my life. Possibilities: Studying in Spain, working in Costa Rica, getting married (ok, that happened after I started this, but nothing exciting was really documented), honeymoon in Costa Rica, anniversary trip last year to upstate New York and Montreal. Basically, anything I neglected to post about at the time that seems noteworthy to me now. Hindsight is 20/20, right?

I adore dahlias. I don’t know if I have a favorite flower, but dahlias are up there. They’ve got elements of both sophistication and playfulness, with a touch of wildflower.

My aunt and uncle are insane gardeners. Especially my uncle. He is a whirlwind of outdoor productivity. They grew a field full of magnificent dahlias for my wedding. When I told the florist (whom I used to work for) that they had plans to grow flowers for me, he was skeptical. He said he would have a back up plan. He’s seen other brides who said they would grow their own flowers, and it is almost always a disaster. I knew it wouldn’t be. 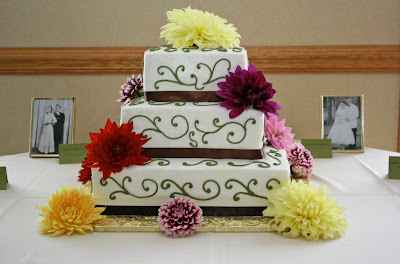 Photo by Jessica Bush
And it wasn’t. Check out our amazing cake flowers, all from my aunt and uncle’s dahlia garden!

See that fiery orange one in the top left of my bouquet? The morning of the wedding, my mom dropped off some extra dahlias at the florist, and he worked this little fireball into the bouquet, his wedding gift to me.

So, this year, the first year I’ve been married with access to dirt in which to plant things, I wanted dahlias.
This afternoon I planted eight bulbs all through our beds, which are already occupied with other stuff planted by the previous tenants. Since they’re nothing to look at yet, just lumps of dirt, here’s a picture of a bulb I planted in a container on the balcony a few weeks ago. 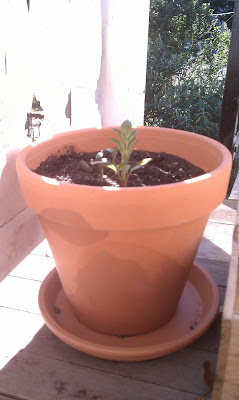 It’s a stand-in for future dahlia sprouts, a representation of what I hope is to come.

There have been a lot of indie/diy wedding/bridal blogs I’ve been reading recently. A Practical Wedding is probably one of my favorites for many reasons, not least of which is the comprehensive list of links to other blogs that might be of interest to someone reading it.

All sorts of Recessionista/Recession Bride/Recession Wedding posts are going up in said blogs. I don’t know that the recession is directly impacting Chad and I per se, but I am definitely way more conscious of the whole money situation because of it. If we weren’t in the middle of a recession, I probably would be making the same amount of money as I am now, given my liberal arts degrees and my job in social services. I feel pretty good about the security of my job, but talking to unemployed people every day is beginning to wear on my psyche. I’ve never been into spending tons of money, but I have never been so aware of how limited it is than now. It could be because I’m finally paying all of my own bills, but I really think it has more to do with my surroundings at the CareerLink. It’s unsettling to spend so much time trying to help people find jobs and/or file for unemployment.

I would love to buy multiple pairs of shoes and a dress to change in to when we go to Chad’s parents’ house after the reception. I would also love to buy an $80 clutch from an Etsy seller. Somehow these things seem irresponsible to me.

Instead I bought one pair of shoes that are super comfy and should last all night. I’m probably going to make my own clutch to use (most I find online are too small, anyway) . I still might buy a second dress to wear to Harrisburg, though. Would that be silly? I had thoughts of making one, but by the time I buy all the fabric and supplies, it’s probably cheaper just to buy one. Sigh.