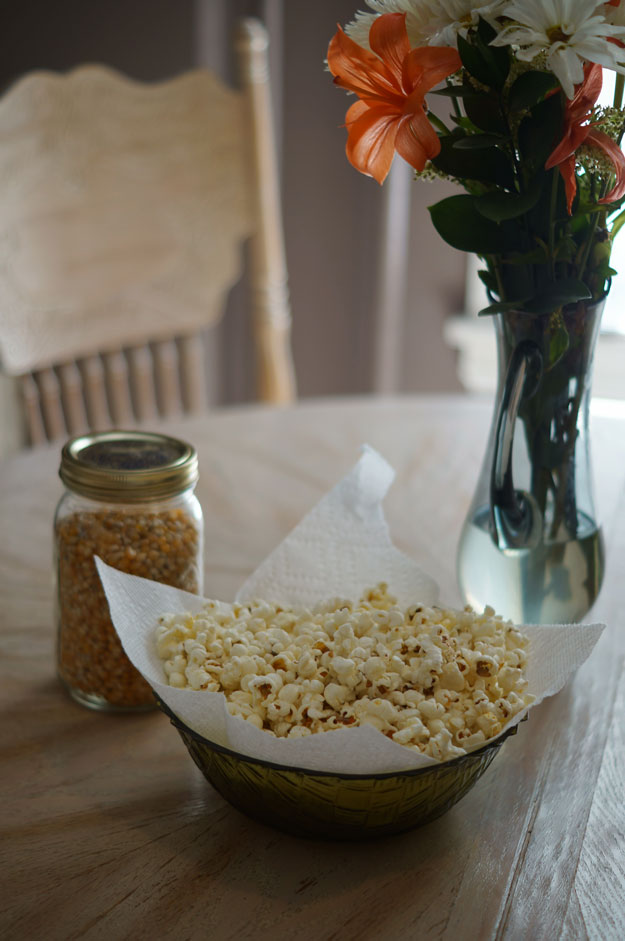 For the longest time, I thought I did not like popcorn. In college, I would buy boxes of microwave popcorn to snack on while staying up to write. It started giving me a stomach ache, and I decided that I just didn’t like it.

But this popcorn is different. Simple. Pure.

My sister told me that she’d been making her own microwave popcorn using popcorn kernels, a little oil, and a brown paper bag. She then could season it however she wanted.

Lacking brown paper lunch bags, I decided to try on the stovetop. I’ll never go back to gross bags of popcorn with some slimy excuse for butter slathered on the insides. This is where it’s at.

Melt 3 tablespoons of coconut oil (it’s light and doesn’t break down at high heat like olive oil does) in a large pan with a lid. Drop in a few popcorn kernels. When those test kernels pop, take the pan off the heat for 30 seconds. Pour in 1/3 cup of popcorn kernels and return to heat. Cover and shake a bit to prevent burning. Enjoy!

For something close to kettle corn, add a bit of raw sugar to the kernels while they’re popping. It’s easier to burn it this way, so keep a close eye on it! After it’s finished, you can sprinkle it with sea salt or parmesan, or drizzle with butter. So good.