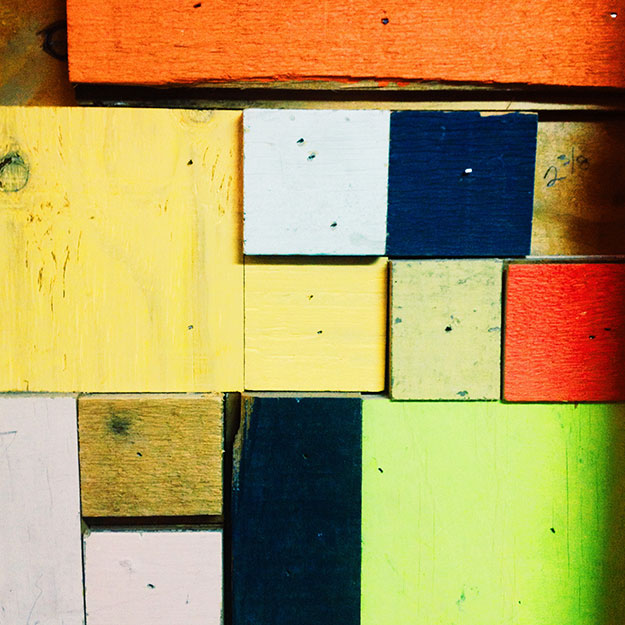 Ben Silbermann, the founder of Pinterest, has given keynotes at Alt Summit a couple times now. I remember people gushing about his talk the first time he spoke there, even though I wasn’t in attendance.

So I was really excited to see that he was back on the Alt Summit schedule this year as the closing keynote. He had a lot of really wonderful things to say, and I did enjoy his talk, despite being pretty exhausted from the previous three days packed full of really great content and new friends.

I’m not sure when it happened, but sometime towards the end of his talk or at the beginning of the Q and A session afterward, I got a sinking feeling in my gut. Why? Because I thought of a question to ask him. I knew if I didn’t ask it, I would regret it for a long time. I’ve never spoken into a microphone in a room full of that many people and I was shaking. But I had to do it. So I stood up and Ellen handed me a mic.

“Hi. My name is Lisa. I have a background in the humanities, but I’ve made a career transition into tech and I just accepted a position as a front-end web developer at Urban Outfitters. Do you have any advice or wisdom for people like me as we transition into an industry that isn’t necessarily welcoming, and at times can be downright hostile, towards women?”

Now, I know this was a Q and A session at a women’s blogging conference. He wasn’t prepared to talk about the massive gender gap in tech. To be honest, I don’t really remember his answer because I was so stunned that I had opened my mouth in front of so many people, but I do remember being mildly unimpressed. It boiled down to something about reaching out to other women in the industry and that changing social norms takes time. I do remember that he congratulated me on my new job, which was pretty surreal and awesome.

But, like, duh. Of course I’ve been networking. Of course I’ve worked really hard. I was a little disappointed he didn’t say something super brilliant. But to be fair, he wasn’t prepared to answer questions like that. And to be honest, it doesn’t matter.

In the spirit of showing up and being seen, I applied to speak on a panel at the 3rd Philadelphia Women in Tech Summit, and I was accepted. I decided to apply at the very last minute, without worrying about rejection, just to see what would happen. I’ve never done anything like this before and I’m a little nervous. If you’re near Philadelphia and even vaguely interested, I’d love to see you there.

Is there any area you’d like to be more visible in? Have you taken any risks, “just to see what would happen?” Do you have any public speaking advice?

And it was the best thing ever.

There’s forever a hackathon going on in the Philly tech scene. They’re all pretty male-dominated. But not LadyHacks. The whole point was to introduce hackathons to the women in tech community (and the female content creators, marketers, designers, etc. who support the community). Eighty percent of the attendees, including me, had never participated in a hackathon before.

I registered because I have learned a ton from Girl Geek Dinners and Girl Develop It events, but as it got closer to the event, I started to lose interest. My recent weekends have been filled, and I just wanted a break. I didn’t know what I could contribute. After Friday night, I even considered not going back on Saturday. Hackathons fly in the face of my introverted nature, and I couldn’t picture myself participating in the entire thing. Plus, I was exhausted.

But I decided I’d let myself sleep in a little bit and not freak out over getting there on time on Saturday morning. I figured I’d stop in and see what was up for the day, then maybe take off in the afternoon.

But then I got sucked in. The energy, the collaboration, the learning, the pieces all fitting together — the day flew by. It was hard for me to even leave the after party at National Mechanics.

My group worked to create a central hub for all of the women in tech events in the area. The female tech scene is so brilliant and welcoming that there’s almost always something happening. With the She Tech Philly site, interested parties won’t have to visit multiple MeetUp pages to keep track of what’s going on every month. We’re also planning to launch a Mentor Match Up forum/board, post job opportunities, and regularly spotlight a different woman from the community each week/month.

And then we got to present. And I found myself speaking into a microphone on a stage at a tech event. A shy Mennonite farm girl from Central PA with a liberal arts background. It felt huge.

I showed up. I met people. I worked. I learned. I shared. I found out that I had something to say.

I have this unproductive habit of sending myself links to articles I’ve read that I want to be able to reread or access later. It makes for a cluttered inbox, and often I forget about them anyway. Though we now spend hours curating visuals on Pinterest, I’ve wondered about practical ways to curate writing or written information. For now, this may be the best place to keep track of things like this. And maybe I’m not the only one who will enjoy them. Let me know if you do!

So anyway. Here’s some things I’ve been reading as of late.

…and a response to the above piece on The Rumpus.

Beautiful piece about Jonathan Safran Foer, on the occasion of his 35th birthday in March.

The mainstream seems to be finally into 20-something females telling their own stories.

…like this one, on our relationships with people and our bodies.

On waiting during Holy Week, and otherwise.

Another of the very many reasons why reading is important.

What have you been reading online lately?

This morning, I found this Lisa Bloom article in Huffington Post. It’s titled “How to Talk to Little Girls.” She recounts an interaction she had with a little girl, who seemed surprised that Bloom started asking her questions about what books she liked to read, instead of squealing over how cute she was.

Since sometime in high school, I’ve had this idea that maybe we should change how we relate to daughters. I had a friend whose family only commented on her looks, from the time she was little. I, the oldest child in a farming family, became more “farm kid” than “little girl” (at least until my brother was born and was old enough to wander around the farm with little supervision). My parents bought me dolls, tractors, and a Tonka truck. They told me I was smart. I believed them. When they didn’t have time to read to me when I wanted to be read to, I decided I would do it myself. I remember struggling through the Little House on the Prairie series at an unnaturally young age. Every book I finished was an accomplishment, and my parents celebrated with me. Sometimes this meant ice cream.
I wanted to wear dresses to school, but my mom rarely let me because when she did, I still crawled under trees and bushes during recess, tearing countless numbers of little-girl pantyhose.
To my farm-kid, messy-haired brain, being pretty meant having long straight hair. I thought my little sister was way prettier than I was, and that I had no hope of ever being as pretty as she. Unruly hair meant short hair, for ease of management, and this was before my awareness of flat irons and straightening serum. It was inevitable that my sister would always be prettier than I. It bothered me sometimes, but mostly I figured there was nothing that could be done for me to also have long, straight hair, so I didn’t worry about it too much. I could climb trees and read books and jump fences and build forts in the barn. Also, I never had to worry about getting gum stuck in my hair, something that happened with uncommon frequency to my sister, for whom chewing gum eventually became prohibited.
The aforementioned childhood friend also had long hair. Not as straight as my sister’s, but straighter than mine. She told me once that her dad didn’t want her to have short hair. That concept seemed foreign to me. I wasn’t aware that my dad had any special preferences about my hair. I had even gotten my hair cut at the barbershop with him on occasion.
Adolescent insecurities were inescapable, even though my parents didn’t place as much emphasis on prettiness. I do think it was a little easier for me than most adolescent females, though, at least in this department. Because there was a sudden new set of expectations for me, I was aware of the juxtaposition, and that awareness made it easier for me to point out and think about the reasons why.
Once, in high school, aforementioned childhood friend and I showed up at school in similar enough outfits. As “You look cuter than me!” came out of her mouth, she seemed visibly annoyed that the precedent of my awkward tomboyishness juxtaposed with her femininity may have been coming to an end. I could hear the disappointment in her voice. It wasn’t a compliment. It was fear. It was competition. I was shocked, confused, and a little bit scared.
Unfortunately, even now, with friends my age, I find myself greeting them with comments about their appearance. Compliments on hair, clothes, shoes.
When did I start this? I’m not entirely sure. I don’t like that I do it. As the words are coming out of my mouth, I feel like I’m adding to the unbearable burden of socially acceptable femininity, and I hate it. It feels like betrayal.
Tell your daughters they’re smart. Tell them you admire them and their creativity. Ask them about their ideas, their plans. Ask them their opinions about their world.
But please, don’t stop there. Tell your sisters, your mom, your friends how smart they are. How much you admire them and the way they think. Ask them about their ideas, their plans. Ask them their opinions about their world.
Even for adult women, those kinds of questions may come as a surprise, as they do to the little girl in Lisa Bloom’s piece.
Let’s get rid of the surprise.
P.S. A bit of irony: The cover of Lisa Bloom’s book, Think: Straight Talk for Women to Stay Smart in a Dumbed-Down World, features Bloom herself, well-dressed, -coiffed, and -manicured. Seems like a poor choice of cover art, given the premise of the HuffPo piece. 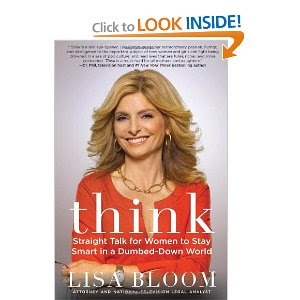